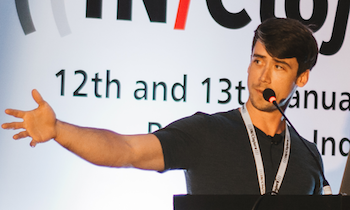 I’m an experienced software developer. I enjoy coming up with simple solutions to seemingly complex problems. I’ve proven to be a reliable technology leader that can be depended on to understand business requirements, make technology choices, and make teams better through individual contributions and mentoring others.

Prior to Gemini, I worked at Coinbase in their short-lived Chicago office. The Chicago office was tasked with delivering a new high performance exchange.

Previously, I worked at at Outpace. There I mostly developed marketing tools that decided what millions of people saw when interacting with large corporations through mostly electronic mediums. While at Outpace I lead a couple different teams including the one tasked with rewriting our core product. That lead to a significantly more flexible, understandable, and reliable product while being incredibly faster.

While at Outpace, I was part of a group that spun out another marketing startup. That startup was Lumanu and I headed up technology as the CTO. While I was there, Lumanu scoured the web for articles and extracted useful data. That data was used to both help authors create better content and help marketers build relationships with content creators. I set architecture direction, made technology choices, set business direction, talked to potential investors, dealt with third-party vendors, helped with recruiting, and provided guidance across the data science and software engineering teams.

Before Outpace and Lumanu, I worked at DRW Trading. At DRW I spent my time writing research tools, trading systems (latency sensitive and non-latency sensitive), and more.

I’ve worked on a range of problems using a variety of technologies and methodologies. I’ve found testing to be critical to delivering quality software.

I’ve worked professionally in more languages than I can remember. From 2014 to 2018, most my development has been in Clojure and ClojureScript. Prior to that I worked in Java, C#, C++, C, Q, Perl, Python, Ruby, JavaScript, Clojure, ClojureScript, Scala, Haskell, Emacs Lisp, Scala and VBA. I’ve found writing in a functional style leads to easier to reason about code.

When not coding I try to be active, mostly focusing on rock climbing and sailing. I’ve hiked to the top of Mount Kilimanjaro and have sailed multiple times in the Chicago to Mackinac race. In the 2013 and 2015 race the boat I crewed on, Talisman, placed second in our fleet. I’ve started to keep a brief timeline of some of my adventures. The timeline isn’t complete, but it contains highlights.

The best way to contact me is through email. I can also be found on Twitter, Github, LinkedIn, and Goodreads.