Over the weekend of April 1st, 2011 myself and two friends, Dave and Chris, went to Mount Carroll, Illinois and took part in the High Profile Adventure Camp. We stayed at a YMCA camp (Camp Benson). While this was our first time at the camp this was the sixth time the camp has been held.

The adventure camp was designed to teach skills needed to partake in an adventure race. According to Wikipedia, “Adventure racing is a combination of two or more endurance disciplines, including orienteering, cross-country running, mountain biking, paddling, and climbing and related rope skills.” Based on my limited experience that definition seems to fit. This year the camp focused on orienteering (and navigation), paddling, and rope skills. The camp was composed of lectures and hands on learning opportunities. The camp finished with two different adventure races, a four-hour race and an eight-hour race.

The first presentation on Friday night was about paddling. It was focused on paddling with a kayak paddle since that was what we would be using in the adventure race. Different strokes, steering techniques, grip, and sizing of equipment were the covered topics.

The second presentation on Saturday night was about orienteering. Orienteering is a form of navigating with a map and compass from one location to the next. The orienteering section of the class went over how to read an orienteering map and a normal topographical map. We also discussed using a compass to figuring out headings and why you typically don’t turn to your compass during a race. To summarize, you can usually tell direction based off surrounding landmarks and referring to your compass simply slows you down.

It is a little hazy but I believe we woke up sometime between 6 and 6:30 AM on Saturday to go get the supplied hot breakfast. We then made our way to the school bus to take a trip down to a park on the Mississippi River. There we broke up into a few different groups. Dave, Chris, and I choose to be in the complete beginners group. Because of this we first went off with an experienced adventure racer and practiced orienteering in the woods. We managed to make it to five checkpoints. 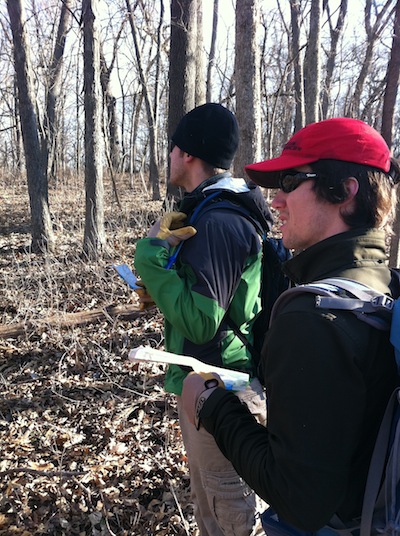 After about one and a half hours of orienteering we made our way back to the river, put on some water-proof clothing, and got into a canoe to practice paddling. The water proof clothing was great because while it wouldn’t keep us dry if we fell in the water, it did keep us dry from water off the paddles. Luckily for us, even though we had a tipsy three man canoe, we did not tip. We did have issues keeping a straight course. Because of time constraints we were not able to try out different roles. Before the next adventure race canoeing is definitely an area where Chris, Dave, and I could use some practice.

Post canoeing we packed back into the bus and rode back to Camp Benson. We had a short break, designed to give you time to eat some food, before the next presentation. We didn’t plan ahead so we hadn’t brought any food. We had a lunch composed of Cliff bars and other granola bars.

After lunch we had an hour and half presentation on ropes. This included zip-lines, rappelling, ascending, and Tyrolean traversing. The presenter also talked briefly about rock climbing (specifically top roping). This presentation focused mainly on safety. The focus on safety was good as screwing up while rappelling or ascending a 115 foot cliff or going down a zip-line off a 50 foot cliff could cause some serious damage. 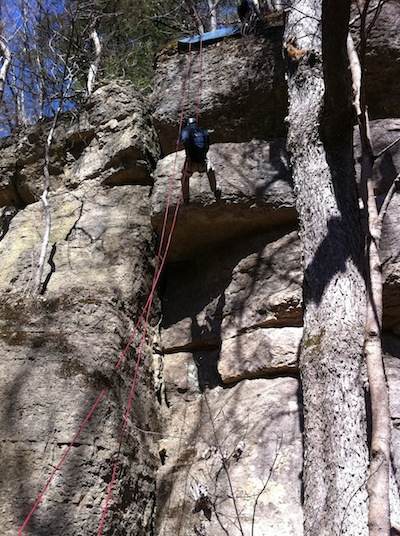 After ascending we took a zip-line down to a top rope climbing section. We climbed some routes and it was time to head in for dinner. A Tyrolean traverse over a river and a short hike up a hill and we were back at the camp and ready for dinner. 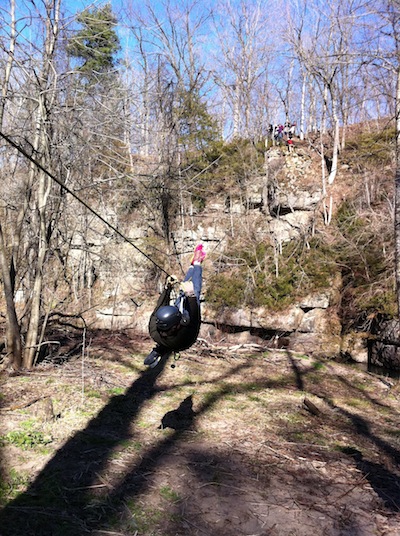 It was during the ropes practice that we realized we would be biking 4 or 5 miles the next day. We didn’t bring bikes. We were led to believe we wouldn’t need them. We rushed to talk to Gerry (the leader) about this. He pointed us towards a shed that had some bikes for the YMCA camp. While the bikes were not the right size we were lucky we could borrow some. We would need them on Sunday.

After dinner, Robyn Benincasa gave a presentation which helped get us excited about the adventure race. She regaled us with tales from past adventure races and showed us videos from the races. Overall she has been in some pretty extreme conditions and I think we all left both extremely impressed and thinking we would never be able to do some of the things she has done.

The next talk was a preparation for the race. This is when the map was passed out and the course was described. This is when I became the captain of our team. After this talk the eight hour teams prepared for their race which started at 6 am the next morning. My team didn’t really prepare Saturday night since were were doing the 4 hour race and we would have till 9 am to prepare the next morning. We did do a little preparation which you can see in the picture below. 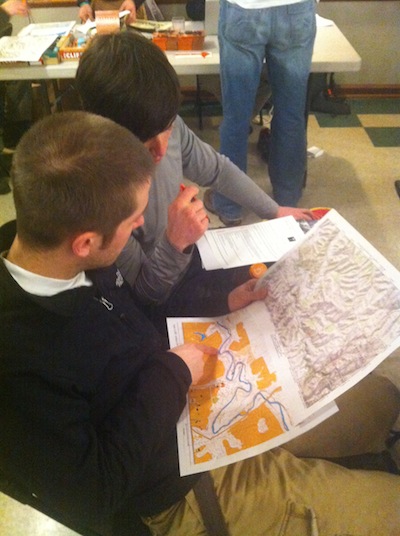 Sunday morning we woke up and ate the supplied cold breakfast and packed our gear. Gear included an extra set of clothes (in case we fell in the river during the canoeing portion), a head lamp for navigating a cave, snacks, and water. We also had to drive our bikes to the canoe to bike transition stage. There we also staged our helmets and extra pair of shoes. We staged our climbing gear at the bike drop off point since we wouldn’t need those until the last part of the race.

Come 9 am we are all lined up at the starting line and rearing to go. Gerry starts the race and we jog in front of the pack to pick up our canoe. We carried the canoe down to the launch point on the river. We were the first team to drop off their canoe. After dropping off the canoe we navigated the woods to find three checkpoints before heading back to the canoe. Unfortunately for us we made a mistake navigating to the first checkpoint which cost us some time and we dropped back to be with the rest of the pack.

We had some issues launching the canoe. Well, we didn’t really have multiple issues, just one. We tipped. We did not orient the canoe the direction of the current so when we jumped in disaster struck. The water rushed over the edge of the canoe causing us to completely tip. This was not the last time we would end up in the water. While we never fell in again, we did have to jump out of the canoe a few times to drag it over shallow spots in the river. Having three men in the canoe was a disadvantage for navigating the shallow river as the extra weight caused us to become stuck quite a few times. Between our extra weight and our lack of technique we got stuck on quite a few rocks.

Eventually we finished the canoeing section and started transitioning to our bikes. Before getting on the bikes we all switched to our dry clothes. This transition took a while, about 20 minutes, and is another area we could do better next time.

The bike path wasn’t off road but was on a not so great paved road. The path also started with an immediate steep uphill. Steep enough that we had to get off our bikes and walk. After the first big hill the path was basically a series of declines and inclines. By this point we were exhausted, so we followed a pattern of riding down the declines and then walking up the inclines. Dave’s chain also came off once so we had to stop and take the time to get it back on.

During the bike ride we had to carry our paddles to the bike drop off point. We made the mistake of strapping the paddles to our packs in a way that caused them to act as a massive brake by drastically increasing the wind resistance. We saw other teams duct tape them to their bike so the paddle was more like a tail. This would have minimized the increased forward wind resistance.

We arrived back at the camp, dropped off our bikes, and transitioned to our climbing gear. We then had to navigate to (I think) eight more checkpoints. By this point we were exhausted and kept to a quick hiking pace for the remainder of the race. We had a few checkpoints to go before needing to cross a river (getting us wet again). After crossing we had to cross again to get to a cave which had a checkpoint at at the very end of it. 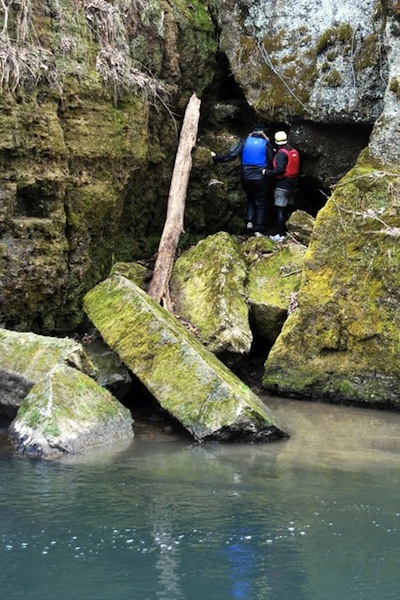 The cave was pretty awesome. It was mostly slightly larger than a single person and had water up to your mid-calf. On the ceilings and walls were frozen bats. They were actually covered in ice. This is how they hibernate during the winter. There were also frogs underfoot. At one point in the cave you had to crouch down to get through. For more pictures I’d recommend checking out the official pictures from the camp.

After the cave we found the next checkpoint. To get to the checkpoint after that one we had to rappel down a 120 foot cliff and then ascend up a different rope back up the cliff. Because we were part of the four hour race only one of us had to ascend back up the cliff. During the practice the previous day I was the most successful at ascending so I did it during the adventure race. I’ll not be modest and admit I rocked my way up that rope, passing all others who were ascending up the other ropes. We probably passed two or three teams between the rappelling and ascending up the cliff.

After the ascent I was exhausted. We only had two more checkpoints left though so we pushed on. After the final checkpoint we went down a huge zip-line and attempted to jog to the finish. After about 20 - 30 meters we had to stop and continue walking. We were all exhausted. When we got close to the finish we started jogging again and crossed the finish lining moving fast. 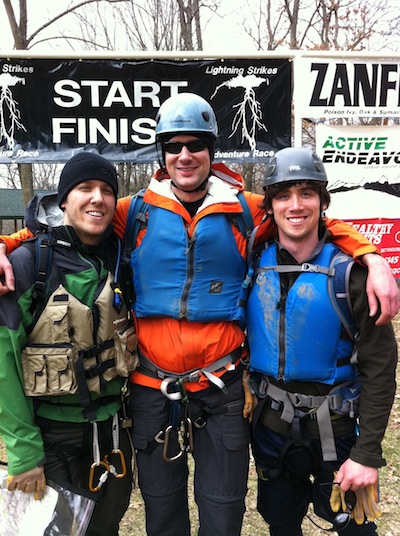 In our division we got second because we finished the race 8 minutes after the four hour limit. This is really unfortunate as the other team in our division did not get all the checkpoints. That means that had we been 8 minutes quicker we would have won despite taking longer to finish. Regardless, we did extremely well for a team of complete newbies who didn’t even bring their own bikes.

I think we’ll be looking into doing other adventure races in the future. Next time we’ll have to bring our own bikes.

Advice for next time: