Most of this text was originally an email sent out to my family immediately after the trip. As a result, it sort of misses some details about routes that I’ve been including in other write-ups. Recommendations at the bottom are from my memory now (almost 2 years after the original trip).

Four of us (Alina, Christine, Nate, and myself) went down to El Potrero Chico in Mexico from February 13th till February 20th. We flew into Monterrey and then took an hour cab ride to a camping area / hotel called La Posada. We rented the Casa Grande, a four bed house with kitchen and stayed there for the week. La Posada is one of the places people stay when climbing in El Potrero Chico and I believe one of the more popular. It, along with the other camping areas, is about a 10-15 minute walk down a road from the entrance to the park. From the park entrance you could get to climbs with anywhere from five minutes to an hour of hiking off road. 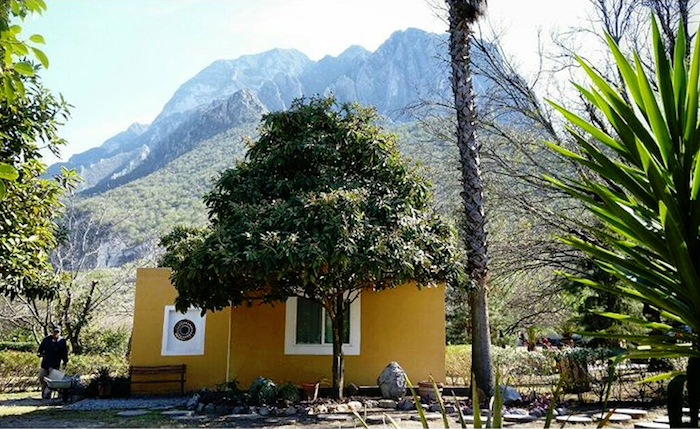 View from our back porch

We arrived in the early afternoon on Saturday (the 13th). We went into town and bought some food from a local corner grocery. We primarily used this food for breakfasts and ate Clif bars and snacks while climbing. Dinners were always from a restaurant in the area. We also hiked into the park to check out the climbs in preparation for the next day. If we had known how close and accessible the climbing was we probably would have squeezed in some climbing on Saturday. 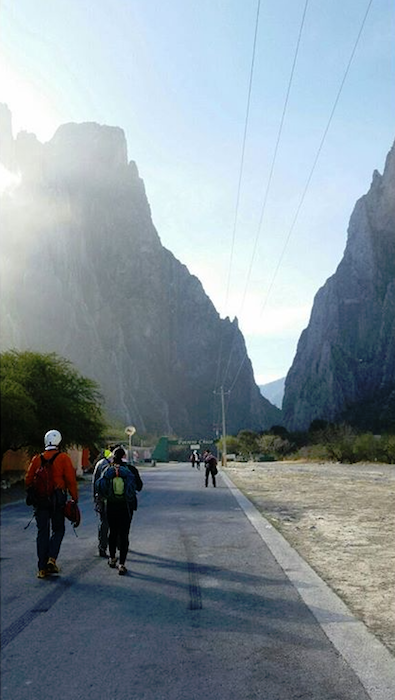 Walking to the park entrance

We took Tuesday off and spent the entire day with Alina’s friend from Monterrey. He took us to his favorite restaurant and showed some of Monterrey and the surrounding area.

We woke up early Wednesday and got to the route “Will the Wolf Survive?” slightly after 7:30 AM. This route was our first planned multi-pitch route. “Will the Wolf Survive” is a 4 pitch climb and estimated at around 400 feet of climbing. I enjoyed the climb, though when rappelling our rope got stuck and I had to reclimb part of it to get the rope down. I think all four of us were back on the ground around 1 PM. We then continued climbing single pitch routes at the part of the park called the “Cat Wall.” 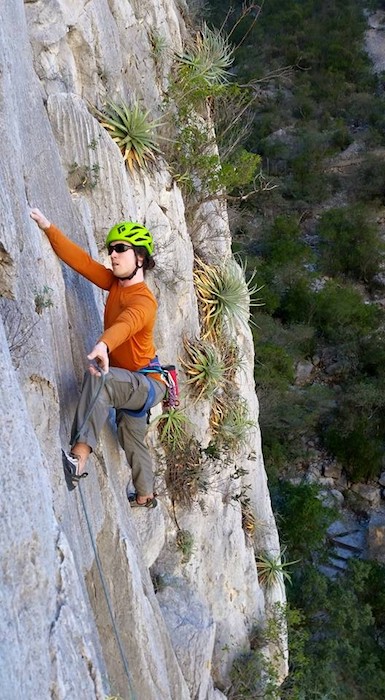 Clipping a bolt at Cat Wall

We woke up early again on Thursday to climb Satori. Satori is a 7 pitch, about 700 feet, climb. After a pretty challenging hike, we arrived at the base of the climb around 8 AM. Nate and I were the lead pair going up this route. We got to the top sometime between 1 and 2 PM. Nate and I waited at the top for Alina and Christine and then we rappelled down. We spent 1 - 2 hours rappelling and then hiked back out. It was a pretty great view from the top and a really different feeling climbing that high off the ground. This is the biggest climb I’ve done. 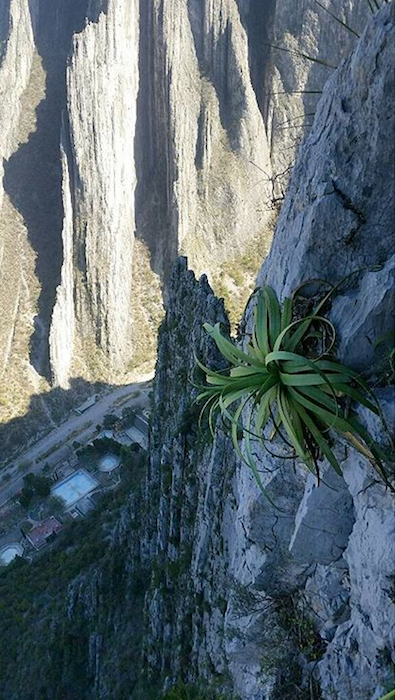 Random show from up on Satori. Those blue rectangles are HUGE pools. 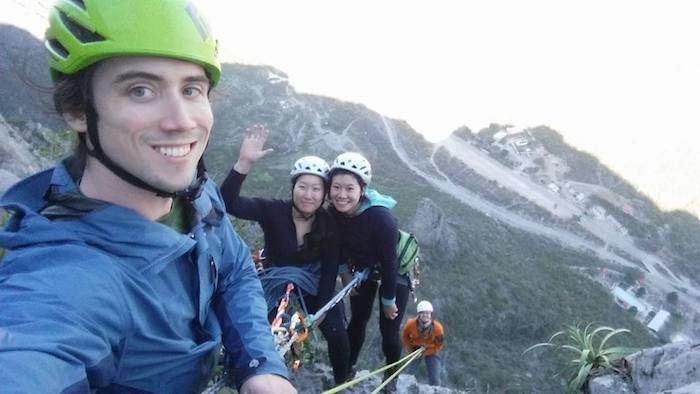 The four of us starting the rappel down Satori.

Friday was Nate’s last day but we still helped him squeeze in some climbing in the morning. After Nate left the rest of us continued climbing. After spending four other days climbing we were feeling more comfortable on this rock and, despite being worn out, we climbed our hardest climbs of the trip.

Saturday was a travel day back to Monterrey and then back to Chicago.

The trip was pretty amazing. We all felt like we were just getting into the swing of it and wished we had more time down there.

You’ll want to bring a 70 meter rope. You also will want to wear a helmet. There is a fair amount of rockfall.

I don’t know the current (writing this paragraph in November 2017) guidebook situation. When we were there in 2016 we picked up a thin paper guidebook. We quickly learned that you really should take the number of draw recommendation with a grain of salt. Bring up a bunch of draws. I’ve recently read 24 as a recommended number if you are linking up multi-pitch routes.

This might be weather dependent, but don’t climb in the sun. We climbed a little bit in the sun and it was brutal. Follow the shade. Because of the orientation of the park, you can always find it.

Even if it is warm outside, you might want to bring up a jacket to protect yourself from the wind. Once you get high on the wall the wind really picks up. You can see how all of us had on some sort of fleece or wind-proof jacket in the picture of us at the top of Satori. We learned this the hard way after climbing “Will the Wolf Survive?” and being real cold near the top.

There are a lot of bolts. Even so, every once in a while something looks run out. Usually that meant that section was quite easy and there was a very small chance of falling. You’ll be fine.

Some of the approaches have a lot of scree. Be careful.

We ate a lot of dinners at various restaurants all within walking distance of were we stayed. It was pretty tasty and I’d probably do the same again. There was a pizza and margarita trailer between the park and where we stayed. We befriended the owner and ended up eating and drinking there a couple of times.

You’ll want calorie dense food for the actual climbing. You’re potentially going to be on a wall all day and will want to minimize what you’re carrying.

We got by alright without a car. It wasn’t too costly to have someone drive us back and forth from the airport and the climbing is all within walking distance. A car would have been useful for getting to town for shopping or checking out El Buho. We were able to bum rides from others when we went shopping.