I often find myself browsing the Internet and then suddenly I want to have a Clojure REPL at my fingertips. As I’ve become better with emacs and paredit I’ve become dependent on the powerful editing this combo affords. The rest of this post details how I changed my five step process into a two step process. It does not explain basic emacs/slime setup but rather explains how I cut a few steps out of a suboptimal workflow for getting a powerful Clojure REPL up and running in emacs.

My previous workflow was the following:

This five step process was terrible. From me seeing something interesting to try to having a REPL open took too much time.

Today I changed my process so it on takes two steps. They are:

This is a much better. I’ll admit had a lot of room for improvement so it wasn’t too hard to make it better. Below are the steps I took to cut three steps.

First, using Leiningen 1.4.0, I ran lein install swank-clojure 1.3.0-SNAPSHOT. This installed a script called swank-clojure into $HOME/.lein/bin. When run, this script starts a swank server waiting for connections on port 4005.

Next I wrote a function in elisp that gives emacs the ability to call the newly installed swank-clojure script, wait for the swank server to start, and then connect to it. This function, clojure-swank, can be seen below. It creates a buffer named *clojure-swank*, runs the newly installed script, and captures the output in the freshly created buffer. When the “Connection opened” line appears slime-connect is called, connecting emacs to the freshly started swank server. After this we are at the REPL with all the advantages that emacs and paredit give us.

Both of those functions need to be added to a location where they will get defined on emacs start-up. Once this is done the powerful REPL you are used to emacs providing can be at your finger tips in practically no time at all.

The other day I stumbled across some Clojure code that used mutual recursion. Mutual recursion can be a valuable tool when solving a problem. Unfortunately because of the lack of tail call optimization on the JVM this can be a dangerous technique when writing Clojure code. It can be easy to forget about this limitation and end up writing code that blows the stack.

Take the classic even/odd checking code from the Wikipedia page. If we just translate it to Clojure it will cause a stack overflow error when we pass in a large number. The massive number of function calls require before returning causes too much memory to be consumed.

Luckily since Clojure 1.0 there has been a useful function for dealing with this. trampoline, with minor modifications to your code, can be used to get around the lack of tail call optimizations (docs here).

To make our sample code work with trampoline we simply change our functions to return a closure which wraps the call that was previously being executed. This just entails putting a # before the final s-exp. This takes advantage of Clojure’s anonymous function syntax to change the function call into a closure which is returned.

By doing this we’ve changed how the caller interacts with my-even? and my-odd?. It now needs to be called by trampoline.

Now we no longer suffer from the stack overflow error.

I think we can still do better though, because now the caller of my-even? and my-odd? suffers since they are forced to remember to use trampoline. By forcing this on the caller, we’ve pushed what should be hidden implementations details into the callers code. We can fix this by pushing the use of trampoline into our functions.

Now we have the best of both worlds. Mutual recursion without the worry of a stack overflow and functions that don’t force the caller to be aware of the implementation details.

Recently I was writing some Clojure with a coworker and we needed to insert values into a nested map structure. Our first solution (and example of using it at the repl) looked something like this.

This worked but seemed overly verbose for doing what (in our minds) should have been a simple operation. After some digging around in the docs we found the function assoc-in. This useful function allowed us to greatly simplify the code.

Much simpler and easier to read. The next person to look at the code will be able to quickly skim and tell what the code is doing.

assoc-in can also be used with nested associative structures like vectors.

Hopefully this post makes searching for how to insert into nested maps slighly easier for the next person who thinks there must be a better way for doing this.

Recently I found myself wanting to plot some time series data and wanted to do this in Clojure. Unfortunately Incanter, a good statistical and graphics library for Clojure, did not provide a way to plot data where the x-axis is a time value. A quick fork on github and a pull request later and now Incanter does. Since I added this functionality I thought I would write up a short example of using it.

The example time series data I’m using I took from Yahoo’s finance section. Here is a link to the csv file I used.

I’m using the read-dataset function provided by Incanter. This procedure reads a delimited file (or URL) and returns an Incanter dataset.

Yahoo stores the date in a yyyy-mm-dd format. I need to convert that to milliseconds from the epoch so it can be used in time-series-plot as the x-axis data. To do this I wrote a function which takes the string representation of the date, splits in on “-”, then use the joda-date and to-ms functions from incanter.chrono to get the number of milliseconds from the epoch.

The next step is to use the time-series-plot function to actually create the plot. Because the data we have is in a dataset, we can pass in the column names as the x and y parameters and provide the data set as the value to the :data key in the optional parameters.

Then we use the Incanter function view to actually see the chart. 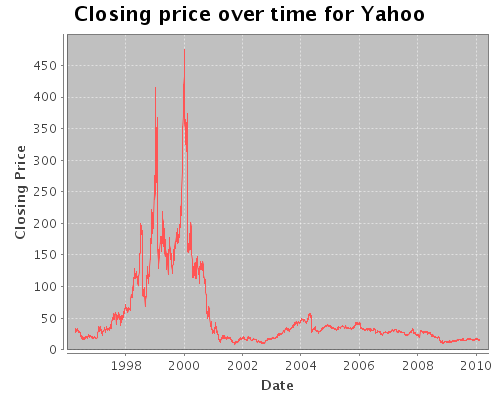